To maintain longevity in the entertainment industry, true stars needn’t rely on gimmicks and outrageous antics. Just ask Olivia Newton-John, who has let her voice do the singing and her heart do the leading during an illustrious career that’s spanned more than four decades. The 62-year-old vocalist and actress still dazzles audiences with her soulful music, but it’s her multi-faceted work behind the scenes that has taken center stage in her life, a spot she’s now happily sharing with her new husband, Amazon Herb Company founder John Easterling.

Born in Cambridge, England in 1948, Newton-John moved to Melbourne, Australia with her family at the age of five. By the age of 15, her sweet personality, wholesome beauty, and compelling vocals were unmistakable. She’s gone on to win four Grammy Awards, an Emmy Award, a slew of American Music Awards, People’s Choice Awards, and Country Music Awards, she’s also had five Billboard number one pop hits (including “Physical,” the early 80’s tune that sparked a legwarmer craze – and a legion of teen boys enamored with the blonde Aussie). But, it was her role as innocent Sandy, in the movie musical Grease, that established her as a household name in the United States.

Not content to rest on her many musical and acting accomplishments, Newton-John served as Goodwill Ambassador to the United Nations Environment Programme, was bestowed an O.B.E. (Order of the British Empire) by Queen Elizabeth, and supported many humanitarian and environmental causes close to her heart. She also became a mother in 1986, giving birth to daughter Chloe. Yet, after much career success, a life-altering challenge presented itself.

It’s amazing to see the passion and vigor with which Newton-John approaches life today, although perhaps not so surprising when you consider that after finding a lump in her right breast in the summer of 1992, she didn’t know how much life she had left to live. “I was very healthy before I had breast cancer. I exercised. I ate well. I wasn’t a smoker,” she explains. Even after a mammogram and needle biopsy turned up nothing unusual, Newton-John’s gut reaction told her something was amiss. A surgical biopsy confirmed her fears; she had breast cancer.

She readily admits, “I really didn’t want to do chemotherapy, but decided I would because I was afraid not to do it, since I’d had surgery already.” Not comfortable with leaving her fate completely up to chemotherapy, Newton-John became even more health conscious. She supplemented chemo with meditation, yoga, chanting, acupuncture, and praying. “Whatever I could do,” she says. “That’s how I first discovered John. We met through mutual friends and he sent me some of his herbs.”

While it took awhile for love to bloom, Newton-John’s emotional journey through breast cancer served as the catalyst for her next act: breast cancer prevention advocate. Based on her own experience, whereby she initially detected the cancer lump, Newton-John launched the Liv Aid ($20, at www.Liv.com), a soft polyurethane pouch filled with a non-toxic lubricant that you place over the breast during a self-exam to help perform the exam correctly and easily. “You know your body better than anyone,” she says about why self-exams are paramount in the battle against breast cancer.

Her personal victory against cancer also led her to announce her partnership with Austin Health and the creation of the Olivia Newton-John Cancer Center and Wellness Center (ONJCWC) on the Austin Campus in her hometown of Melbourne. She agreed to lend her name and efforts to the project on the condition that it incorporate wellness therapies to patients diagnosed with cancer. In April 2008, Newton-John led a trek along 250 miles of the Great Wall of China to raise more than $2 million for the Center. “A lot of wonderful people, sportsmen, celebrities from all over the world, and some cancer survivors who had just finished treatment and who were extremely brave and put themselves through that as part of the healing accompanied me,” she says. Due in large part to her efforts, the Center is expected to start seeing patients in 2012.

An extension of her efforts to bring health and wellness to others, Newton-John owns award-winning Gaia Retreat and Spa, near Australia’s Byron Bay. “My friend and partner, Gregg Cave and I found the property,” she explains of the lush retreat where tranquility abounds. Indeed, her love of the environment and passion to heal others helped seal her love connection with Easterling. The pair, who’ll be celebrating their third anniversary this fall, fell in love surrounded by nature. “We’d been friends, but we just knew the superficial versions of each other,” until, she says, “John took me to the Amazon. Wow! It was an incredible connection.”

“Every June, we go back to the rainforest to celebrate our anniversary. It’s so healing and inspiring,” she says. Love certainly agrees with the songstress. She looks better than ever, which she attributes in large part to the botanical treasures Easterling’s uncovered in the rainforest and introduced her to. She’s since partnered with him to produce Zamu, a health drink made with exotic camu camu fruit, and Lluvia, a skin care line developed from rainforest plants.

Meanwhile, Newton-John hasn’t lost her cult status as the pop singer who led a nation of Americans to get “Physical.” Last year, she made a much-anticipated guest appearance on Fox’s hit musical comedy Glee. She also just finished wrapping up the movie, A Few Best Men, a comedy about a groom and his three best men who travel to the Australian outback for a wedding. Of course, there’s always her music. She recently hosted a Colorado concert honoring John Denver, and her new cd, “Portraits: A Tribute to Great Women of Song,” was released in June. 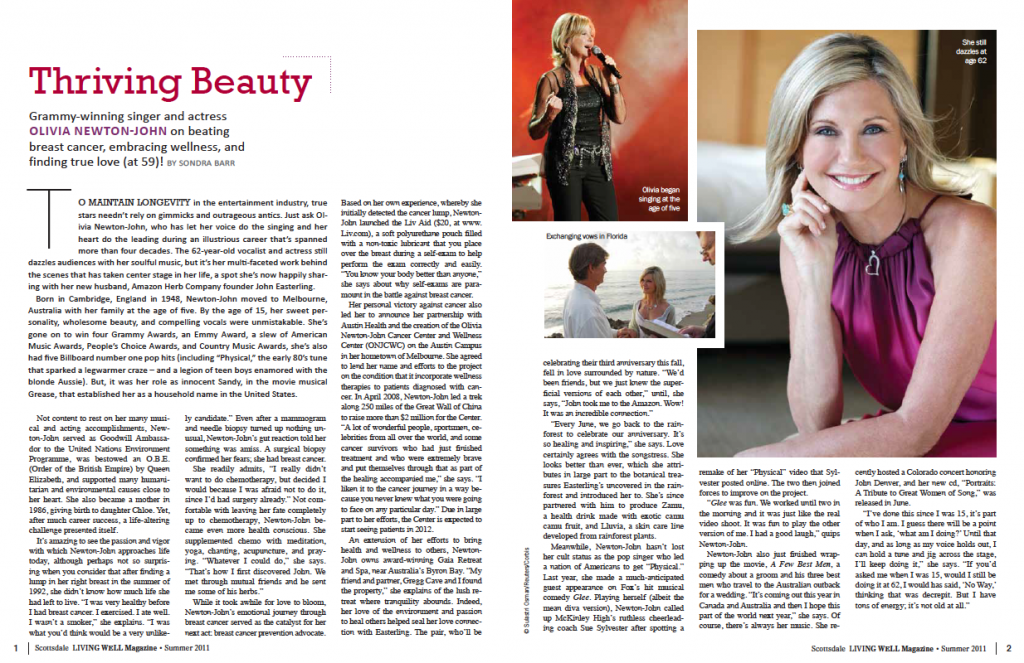 How much attention do you pay to this factor?

By Herb White, CFP, MBA, Life Certain Wealth Strategies, East Denver LIVING WELL Magazine
Could you end up paying higher taxes in retirement? Do you have a lot of money saved in a 401(k) or a traditional IRA? If so, you may be poised to receive significant retirement income […]

I won’t talk too much about this. I will just give you the recipe and let you be the judge. This, my friends, is a gift from me to you. I have searched and searched the grand internet super highway and haven’t found what I was looking for. Yes to the Nutella Brownies but nothing with Biscoff. […]

Luxury Living
Courtesy Five Star Premier Residences of Dallas, North Dallas LIVING WELL Magazine
One of the current trends in retirement that has gained enormous popularity in recent years is the concept of the luxury community. […]