It takes a rare sort of athlete to transcend a sport and become more than a mere footnote or trivia question along the lines of: “What golfer was dubbed Huckleberry Dillinger early in his career?” Tom Watson, the answer to the aforementioned query, is one such athlete. He’s amassed 39 PGA Tour wins (including two Masters, a U.S. Open, and a remarkable five British Opens), been a PGA Player of the Year six times, won five Champions Tour Major Championships, been a five-time leading money winner, and is only the second player in history, after Sam Snead, to post a top 20 finish in at least one major championship in five different decades. He’s a golfing legend, no doubt. And, at 61 years of age, you better believe he well deserves the honor. But legendary status typically references a “past” greatness. Guess what? Watson is still around. And, while Watson may have outgrown his early-career moniker, he continues to demonstrate the staying power of the literary Huckleberry and the gumption of a Dillinger – along with a fierce determination and competitive fire rarely exhibited by folks his age, or any age, for that matter.

“Maybe your standards lessen somewhat the older you get, mine haven’t. My standards are still the same. When I go out to play a game of golf, I try to play the best I possibly can with every shot. There are no throwaways,” says Watson, who lives by the maxim that the date on your birth certificate isn’t predictive of when you should throw in the towel and walk away from a dream realized. “Age is just a number, a reference to how long you’ve lived in this life. It does give you strength sometimes that you can’t imagine.”

Showing Up The Young Guys

The strength Watson refers to was evident during his outstanding performance in the 2009 British Open at Turnberry, where he defied all expectations and was on the verge of becoming golf ’s oldest major champion. On the cusp of turning 60, he was competing against the game’s best players, some of whom were in diapers 32 years previously when he won a British Open there for the first time. It could have been the greatest story in the history of the game: The oldest golfer to play the oldest tournament in the world emerges victorious. Instead, it turned out to be the yarn that could have been. Stewart Cink, who’d grown up watching Watson on TV, beat him in a  four-hole playoff.

While Cink may have been the official winner that day, Watson’s near win at the British Open was the new inspiration for everyone with “A Tuesday seniors discount at IHOP,” described one sports writer. “IHOP is one of my favorite restaurants, my wife and I go there all the time,” laughs Watson of the reference. “But probably the most rewarding result of what I did, almost winning the British Open at Turnberry in 2009, was the response I received from people my age or older. That response was, ‘You’ve given me hope.’

There’s a (Toby Keith) song that goes, ‘I ain’t as good as I once was, but I’m as good once as I ever was,’” explains Watson. “Well, there’s a certain hope in that song and I think it reflected what I did last year.”

Watson’s fortitude and longevity in such an arduous sport may owe something to his solid midwestern beginnings. Born in Kansas City, Missouri, Watson was first introduced to the game at age 6 by his father, Ray. “My father was a very accomplished amateur player and he loved the game with a passion. He cut down a hickory shafted 5 iron and put it in my hands. After I started hitting the ball ok, he taught me how to do things that most young kids – at that age at least – are never taught: how to hook and slice the ball. It was very instrumental in my abilities as a golfer to learn that early.

He took to the game immediately and had ready competition. “My brother Ridge is three years older. We were somewhat competitive – if you catch my drift,” Watson chuckles. “We had a natural contest built into every time we played.” Golf wasn’t Watson’s only favorite sport early on. “I loved baseball, too. But baseball was soon to be out of the picture because I got cut from the midget B team when I was 9 years old.”

Thoughts of becoming a professional golfer gained traction when Watson captured the Kansas City Match Play championship at 14 years of age and garnered local renown while playing on his high school team at The Pembroke Country Day School. From there, he went on to play golf at Stanford University and graduated in 1971 with a degree in psychology.

“My main talent was golf. I didn’t know if I was going to be any good, but I was going to work harder than anyone else at trying to be the best golfer I could be and see where that led me. It led me to practicing long hours and getting to the point where I trusted myself in pressure situations and became a winner,” he says.

Today, Watson credits regular competition as a way to keep him mentally on the ball as he gets older. “We’re very lucky to have what we call the Champions Tour (formerly the Seniors Tour). The thing about the Champions Tour is it keeps you competitive. Physically, I’m not as strong as I used to be. I can’t swing the golf club as fast as I used to. He adds, “I’m not nearly as good a chipper or putter as I used to be, so I practice that more than I do my long game.”

To stay in shape, Watson works out a few hours a week but claims walking is his true elixir. “On the Tour, I always walk; I never take a cart. People don’t understand, a simple 2-mile walk is all you need to stay in shape.” Meanwhile, when he’s not competing, he works on his 400-acre farm outside Kansas City. “There’s a lot of mowing to do and lots of things to attend to,” says Watson, who along with his wife, Hilary, cares for the horses and dogs on the property.

His success extends far beyond the golf course, too. For 25 years Watson’s hosted the Children’s Mercy Golf Tournament, where he’s brought some of the greatest golfers together, including Jack Nicklaus, Arnold Palmer, Lee Trevino, Byron Nelson, and Sam Snead, to help raise over $11 million for sick children. The First Tee of Greater Kansas City has also benefited greatly from Watson’s involvement.

According to Pat Zuk, executive director of the organization that helps develop values in young people such as confidence, perseverance, and judgment through golf, “Tom is one of those people who just gets it and gives with his time and talent.”

Perhaps the charity nearest to his heart is the Bruce Edwards Foundation for ALS Research, which Watson helped found after his longtime caddie, Bruce Edwards, was diagnosed with ALS in 2003. “There are no mulligans when you contract ALS; when you get it, you die,” details Watson. Says Gwyn Dieterle, a foundation board member, and Edwards’ sister, “If we could put a halo over Tom’s head, we would. Tom never abandoned Bruce. He’s since dedicated himself to help find a cure for ALS.”

With his recently released instructional DVD, Lessons of a Lifetime, out Watson shares what he’s learned during his extended, extraordinary career. As for his most important lesson: “The greatest lesson of my lifetime was given to me by my father, who lived his life simply by the Golden Rule. Treat others the way you want to be treated.”

What does the future hold for this enduring golfer, what else, more golf. “That’s what I am, I’m a golfer. It’s defined me. I love to play the game, and I love to play it well.” 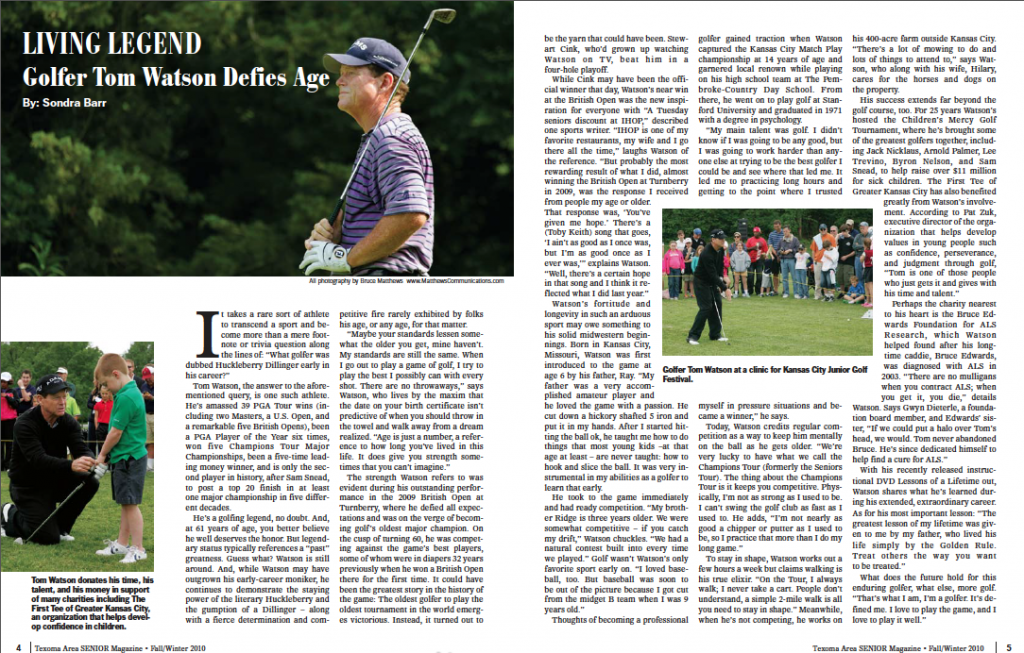 Often, while discussing the concerns and desires that people have about their teeth and smile, it is discovered that many of their issues are in need of evaluation and treatment that is comprehensive in nature. Tooth-by-tooth management of dental needs is not necessarily inappropriate. […]

Have you been feeling a little tired lately?

Have you been feeling a little tired lately?
By Andrew Anderson, PA-C

You think you’re just getting old, because of that tiredness you explain away as the aging process, or that thinning of the hair that once used to be so thick and now finds its home on the hairbrush every time you brush. You may be getting older, or might you have a medical problem, such as thyroid disease. […]

You’ve suffered with back pain after falling or maybe just after bending down to pick up something off the floor. You finally make an appointment with a doctor to have it checked out. Your doctor determines that you have a vertebral compression fracture (VCF). […]