Lisa Rinna laughs when describing her first substantial television role after arriving in Hollywood. It was 1990, and she was playing Jason Bateman’s girlfriend on several episodes of The Hogan Family. “He was only 21 years old and I was 26; so I was already being cast as a cougar very early on,” the vivacious brunette says with a smile. From there, she enjoyed a solid career in her 30s, most notably appearing as Billie Reed, the free-spirited character she played on NBC’s daytime hit Days of our Lives, and as Taylor McBride on the iconic Melrose Place drama on Fox. But it wasn’t until she reached an age that’s commonly considered over-the-hill in Tinseltown that Rinna truly hit her stride to become one of the most recognizable faces on television.

“I was such an ugly duckling growing up,” she says. “I was as awkward as you could possibly be, with these big features. It’s really taken me time to grow into myself and to become the person I am today.” Far from her early days as a gawky kid growing up in Oregon, Rinna has since morphed into a multifaceted, mature bombshell whose career and life are of her own design. In the process, she’s become an outspoken advocate for women of all ages to embrace their sexuality and take risks.

The 49-year-old (she turns 50 in July) has spent the last decade expanding her repertoire both on and off the small screen. Among Rinna’s accomplishments are appearing alongside husband Harry Hamlin in the Broadway musical Chicago, competing on Dancing with the Stars, writing The New York Times best-seller Rinnavation and the follow-up hit The Big Fun Sexy Sex Book, appearing on the cover of Playboy magazine, and developing a fashion line for QVC. Now, she’s competing on NBC’s reality boardroom showdown, Celebrity Apprentice, for the second time.

Seeking redemption after being ousted on the second episode of the popular show in 2007, Rinna’s back to compete against notable returning competitors, including 2010 winner Bret Michaels, in All-Star Celebrity Apprentice, which debuted in March. “I didn’t want to do the show again because I didn’t have a very good time my first go-around,” Rinna says. “But, my daughter Amelia said to me, ‘Mom, I think you should do it, because I think you need to fix that for yourself.’ I thought, what a great message to be able to go in and show my daughters that even if you fail miserably at something, you can get back up on the horse and go back in and fight.” While she can’t divulge the outcome of the show, she will say that redemption is a beautiful thing and that she’s thrilled to be competing for St. Jude Children’s Hospital, a charity near and dear to her heart.

Rinna is all about taking risks at this stage in her life, which is why she’s made increasingly gutsy career choices as she’s gotten older. She points to her 2007 turn on Dancing with the Stars as something she’s proud of. “Being able to do Dancing with the Stars and then going on the tour and visiting 38 different cities with my family on a tour bus and performing every night in front of 15,000 people––how many actors get to do that?” Another daring move was to take on the role of merry murderess Roxie Hart in the Broadway hit Chicago. “You have to sing, act, and dance. I’m not a trained stage actor, so to get that opportunity and do it was really one of the great accomplishments of my life,” she says.

It’s Rinna’s unwillingness to succumb to society’s preconceived notions of what women her age should act and look like that’s given her so much gratification. She’s graced the covers of many magazines and been very open with her fans about her life and what it’s like to live in front of the camera. “I’m somebody who’s felt empowered as I’ve gotten older,” she says of her decision to be so frank with the media. “Unfortunately, I think in our society that people are often looked down upon as they get older. I felt that it was my responsibility to express that it’s okay to be older and look fabulous and feel fabulous.”

She’s also comfortable in decidedly less glamorous roles. Last year, Rinna and hubby Hamlin shot a Depend underwear ad campaign that featured her on the red carpet donning a form-fitting evening gown and––you guessed it––Depend underwear. “It was clever, and I thought it was funny and absolutely what I’m about,” Rinna says. “Why not take a subject that is completely taboo in our society and then turn it on its head? That’s the kind of thing I love to do.” She says, however, that she’s taken a lot of flak for doing it and was roundly criticized, including being accused as desperate for work. “Most people don’t understand it because they’re afraid of it. We judge things when we’re fearful of them,” she says. “I don’t wear Depends right now. Will I in the future? Who knows? But I guarantee you that most of us are going to have that issue sometime in our lives.” According to Rinna, her work for the company was all about the check––specifically a $225,000 donation to Dress for Success made by Depend on her behalf. “If you were given the opportunity to give the charity of your choice that kind of money, why wouldn’t you do that to help people?” she asks.

An entrepreneur at heart, Rinna has her hand in many diverse ventures aside from her work on the small screen, and they typically are rooted in her real-world experiences. Married to Hamlin (an actor named People magazine’s Sexiest Man in 1987) for 16 years, Rinna shared her insecurities, her struggle with a lack of sex drive, and her methods of overcoming them in her book, Rinnavation: Getting Your Best Life Ever. The book––especially the chapter about sex–––was so well received that she followed it up with The Big Fun Sexy Sex Book, which she co-wrote with Ian Kerner, a nationally recognized sex counselor.

“If you lose your sexuality, you lose your mojo—it’s very shameful, and nobody really wants to talk about it,” she says. “It’s very difficult for any woman, whether you’re married to one of the ‘sexiest men alive’ or Hank from Kansas. We’re all the same.” In her books, she stresses the importance of taking risks and facing fears to get outside established comfort zones. “As we get older, we tend to get complacent. That’s really when you need to make an effort to break out of that mold and challenge yourself,” she says.

If Rinna’s life is any indication, you certainly can. In between writing books, her stints on Broadway, reality shows, workout videos, and co-hosting duties on shows including Anderson Cooper’s Anderson Live, she works on her own fashion line. Her LA-based boutique Belle Gray––named after her daughters Delilah Belle, 14, and Amelia Gray, 11—shuttered recently after roughly 10 years in business, and she’s since moved her brand to QVC, where woman flock to her Belle Gray by Lisa Rinna collection. Described as California-cool styles featuring casual, comfortable, and chic shirts, skirts, dresses, jackets and other apparel in a variety of bold colors and ethnic and tribal patterns, the line reflects her approach to life––easy, breezy, and fun.

While Rinna’s admitted to having plastic surgery and using Botox and fillers, she credits her still-vibrant looks to infectious energy and thirst for adventure. “It has very little to do with what product I use or anything that’s external,” she says. “I would say it’s about being happy. And it’s about finding my joy and expressing gratitude. Why do I look better now than I did at 22? It’s because of creating a life that is so joyful and so amazing. I know people are going to read this and think, that is so schmaltzy, but it’s true.”

That doesn’t mean she’s not approaching the pivotal age of 50 without some trepidation. “While I know 50 is the new 30, I don’t think anyone ever expects to be 50,” Rinna says. “It’s a tough number, but I won’t live any differently than I do now. I just want to keep being open and see what opportunities come next. Things come to you in your life at certain times, and you just need to go for it.” 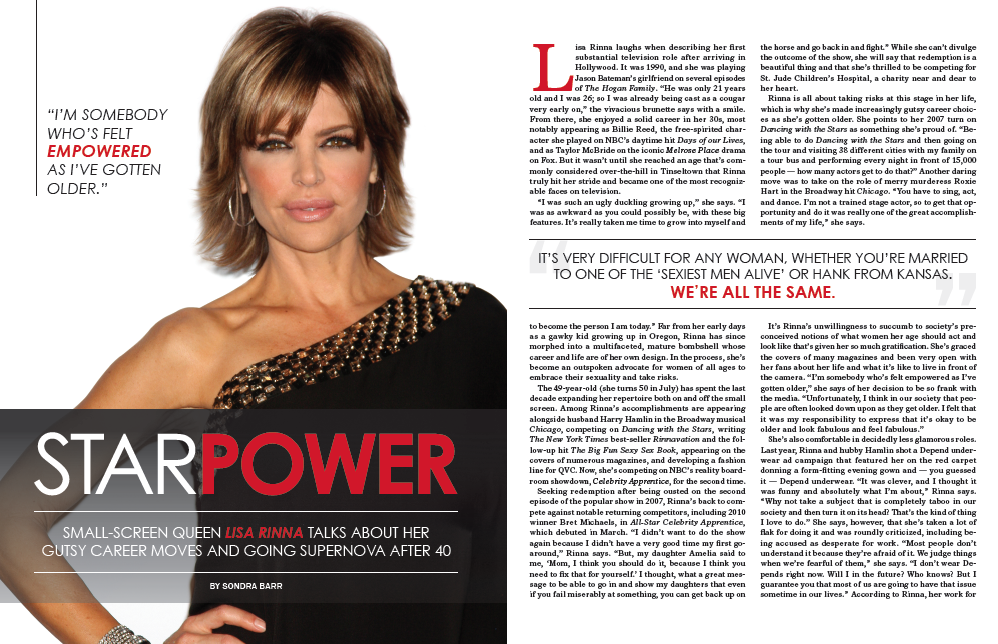 Offering perks, and implementing health and wellness programs, separates you from your competitors and are affordable on any budget

10 Facts about Healthcare Costs
Courtesy Visionary Medical Imaging, Texoma LIVING WELL Magazine
Most of us are fairly good about comparison shopping. Except when it comes to medical care. We simply go where we’re told, have our tests done and pay the bill––whatever the price. There’s a better way. […]

The story about the nurse who refused to administer CPR to an 87-year-old resident at an independent living facility in California has received a great deal of national media attention, and has people debating the issue across the country and in our community. Aside from the issue of administering CPR, the story raises important issues our community needs to be talking about. […]