Most people choose to avoid placing themselves directly in the path of a 70-foot wall of water barreling forward at breakneck speeds – not Laird Hamilton. He’s spent his life courting monstrous waves to ride. Regarded by surfing historians as the “all time best of the best,” big wave surfers, Hamilton’s death-taunting feats have garnered him worldwide acclaim, a preeminent spot in surfing history, roles in film and television, and the obvious trappings of success; yet, it’s his unquenchable thirst for what comes next that drives this extreme athlete to continue to push the limits.

At 48, Hamilton is no longer youthful, but his 6-foot-3-inch frame, enveloped by solid muscle, is still build for a beating, which is often heartily handed to him in the form of an unforgiving break. While men his age tend to tone down risky behavior, Hamilton sees risk at life’s core. “Living is a dangerous game. Car wrecks, heart disease, and all these other little things that are silent, less obvious killers are taking people’s lives every minute,” he says. “This (big wave riding) is an obvious threat, but when you have such an obvious threat, it’s easier to prepare for it.”

A lifetime of experience serves as the preparation keystone to Hamilton’s ability to effectively handle fear while tackling 30-plus-foot swells without perishing. Raised in Hawaii, he was among one of the only fair-skinned, blonde kids in his predominantly Hawaiian neighborhood, which led to abuse and bullying by his peers. The ocean offered a form of solace, escape, and identity.

By the time he reached 5, Hamilton knew the ocean held his future. At 6, he was riding his first custom surfboard and honing the skills and techniques that would serve as the foundation to his surfing prowess. “My mom was from Southern California and she was a surfer; we were around the surf culture. Everyone I looked up to were ocean people,” explains Hamilton. “I lived on the north shore of Oahu where these guys were riding big waves.” One notable surfer, in particular, Bill Hamilton, became more than just a role model after he wed Hamilton’s then-single mother. The union further solidified Hamilton’s connection to the ocean. “I wanted to be like the men in the ocean,” he explains.

“Surfing is the Hawaiian sport of the kings. For me, it was a form of acceptance, an equality, in the ocean that I gravitated towards.” On the ocean, says Hamilton, “you didn’t need to like me, but you needed to respect me.”

By his late teens, Hamilton’s surfing bravado was demanding not only respect, but also a lot of attention, and not just for his skills on the water. His good looks landed him a modeling contract and, along with his boarding skills, a role in the 1987 movie Northshore, but it was the ocean’s allure that beckoned Hamilton more than anything. Proving he was the best surfer wasn’t even the goal.

Hamilton’s sights have always been on taking surfing to previously unimagined levels. “At a certain point, as waves grow in size, they increase in speed, and eventually they become physically impossible to ride without some sort of mechanized instrument because we’re not able to generate the horsepower to catch them,” he says. It was this area where Hamilton’s made his most significant contributions. He pioneered the use of personal water craft for tow-in surfing, which allows surfers to catch previously off limits, monstrous sized waves.

Since the 90s, tow-in surfing has given Hamilton the means to ride, and, more importantly, survive, 70-foot waves, including one at Tahiti’s Teahupo’o break that firmly established him in the annals of surfing lore. There, on August 17, 2000, Hamilton is credited with surfing one of the “heaviest,” most technically difficult waves ever. Videographers’ cameras were trained on him as he tackled the towering wall of water in a spot where serious injuries and even deaths are not uncommon due to the spot’s particularly hazardous shallow-water reef. A photograph of Hamilton riding that wave landed him on the cover of Surfer magazine, with the caption: “oh my god…”

Hamilton’s not ready to say he’s surfed the biggest wave possible, but he does think there’s a limit. “When you get waves of over 100 feet high, that’s the point when we start to become ants in a water hose.” Although, he’s quick to note that there are unique opportunities that arrive due to certain kinds of conditions and locations that could allow for a ride along the limit and possibly beyond.

Then again, it’s not always about the size. “Waves are like dogs, where there are little ferocious ones and there are big, giant gentle ones,” he says. “Big waves are relative to the person. I’m always in envy by the beginner when I see them riding a little wave; it’s little for us, but it’s big for them.” He also points out that age is not a factor in learning to surf. “I taught my one friend how to surf when he was 65 and he’s up there stand-up paddling and riding waves every day.”

Besides tow-in surfing, Hamilton has helped popularize kitesurfing and experimented with foilboards, surfboards that incorporate hydrofoil technology. He’s also become a proponent of stand-up paddle surfing and currently he’s working on his next challenge with the Puma Ocean Racing design team to develop a craft that allows the user to surf underwater. Indeed, he’s constantly testing the limits whether it’s on a wave, riding motocross, snowboarding, or appearing in movies as a stunt double for Pierce Brosnan in a James Bond movie or in The Descendants with George Clooney. He’s also written a guide to peak living, Force of Nature, and was recently featured in Oprah Winfrey Network’s (OWN) production of Oprah Presents Master Class, which offers a look into the minds of modern masters making a unique impact on the world and the lessons they’ve learned.

Of course, what he does may look easy to bystanders, but the danger is real and ever present. “I used to get rescued once a week or every few days when I was a young kid. I’d get washed out to sea and the lifeguards would come out and rescue me. I’ve had some scarier things happen, like being lost at sea and I’ve been held down under water for a long time where I thought I’d never get back up. There’re too many of those to count,” explains Hamilton.

To ride huge waves and walk away in one piece at the end of the day requires a herculean level of fitness. “My health is my lifestyle; it’s just the way I live. I don’t consciously say, ‘ok, I’ve got to say in shape.’ Part of the reason why I’m in shape is because of the things I do,” says Hamilton.

Having a wife and daughters helps keep him going, too. He’s been married for 15 years to volleyball superstar and model Gabrielle Reece. The couple, who’ve both been honored as beauties (Reece was named by Elle magazine as one of the Five Most Beautiful Women in the World in 1989, while Hamilton was named one of the 50 Most Beautiful People in the World by People magazine in 1996), split their time between residences in Malibu, California, and Maui, Hawaii. The duo keeps their relationship strong by excelling in their separate careers. “I can’t do what she does and she doesn’t try to do what I do,” he explains. “For most men it would be challenging to be with an accomplished woman…a lot of guys are too insecure to deal with a woman who doesn’t need them. I’m good with that.”

End of the Ride

For a guy who’s continually pushing the limits, yet quickly approaching an age that rivals the size of the mighty waves he surfs, does Hamilton foresee retiring his board for a safer, more sedate lifestyle? Don’t count on it. A new goal pops up on his bucket list continually. “The best goals are ones that keep modifying, adapting, and evolving,” he says. “Those are real goals that keep moving so you don’t achieve them and say, ‘now what?” 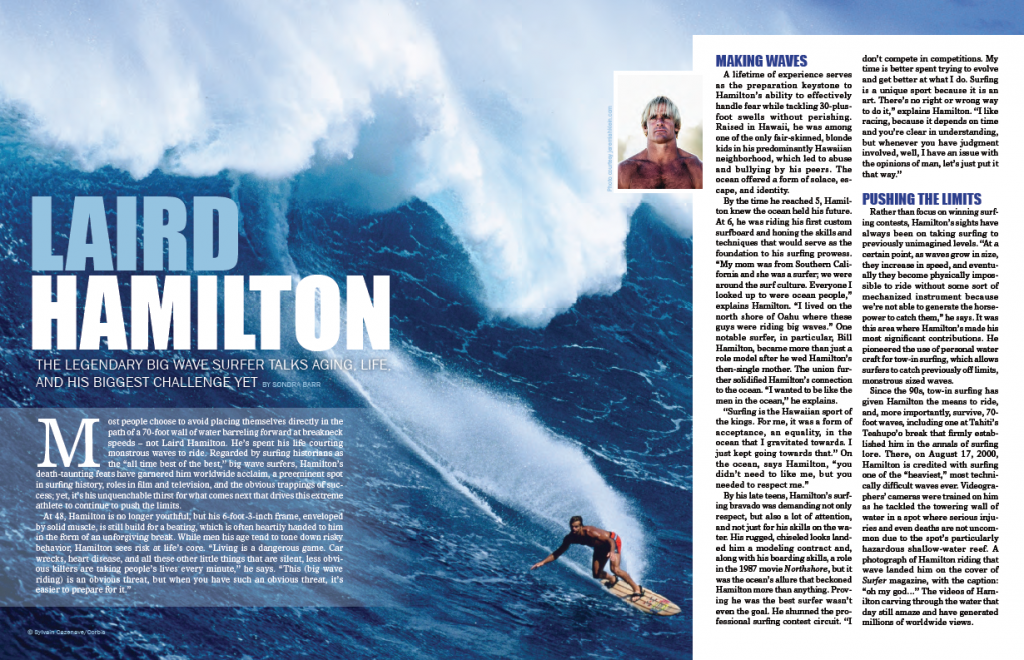 Dealing with a Cancer Diagnosis

By Tina Withrow for LIVING WELL Magazine I met Jimmy during his second cancer crisis. The first was lymphoma, which he conquered in his early 30s. The second was sarcoma of his hand in his […]

Forget the actual process for getting your blood drawn, figuring out what your lab results mean can be just as scary and overwhelming! With so many acronyms, numbers and ranges, it can be difficult to keep track of your health levels. […]

Do I need to see an Orthopedic Surgeon?––Denton Regional Medical Center

An orthopedic surgeon studies damage within the muscular skeletal system and can help to reduce the pain or eliminate the condition. The muscular skeletal system includes bones, joints, tendons, ligaments and muscles. The spine and joints are a common focus for orthopedic medicine. According to the National Institutes of Health, we have over 400 bones and joints in our bodies, not to mention muscles. […]